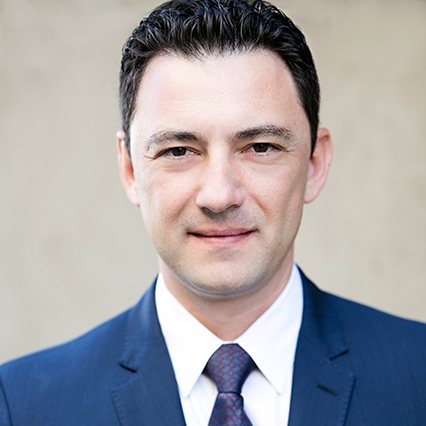 Steve manages and has invested over $230 million in hotel projects valued at over $750 million. In 2010, he started California Real Estate Regional Center, one of the most successful and respected EB-5 Regional Centers in Los Angeles. Steve is also co-GP of a $120+ million 250K sqft office building to 401 key hotel conversion by LAX. Most recently, Steve founded STAY OPEN, a technology forward hospitality operator that converts non-traditional hospitality space into shared accommodations.

Prior to his real estate days, Steve spent seven years with PricewaterhouseCoopers (PwC) in San Jose, San Francisco and Moscow, as a Senior Manager in the Advisory Group specializing in anti-corruption, financial due diligence, regulatory compliance and complex cross border matters. After PwC, he went on to manage a €100 million Eastern European real estate fund and helped an ultra-high net worth foreign family office acquire a $660 million US office portfolio.

Steve serves as President of the Board of Los Angeles Breakers FC, a 45+ team coed non-profit soccer club in West LA. He also serves on the Board of California Country Club Homes Association in Cheviot Hills. Steve received his BS in Accounting and MBA from the University of Southern California (USC) and is a Certified Public Accountant (CPA). Steve’s a fan of early morning yoga, a mean game of live-ball, and cycling along the coast.

Back to Meet The Team
Scroll to top